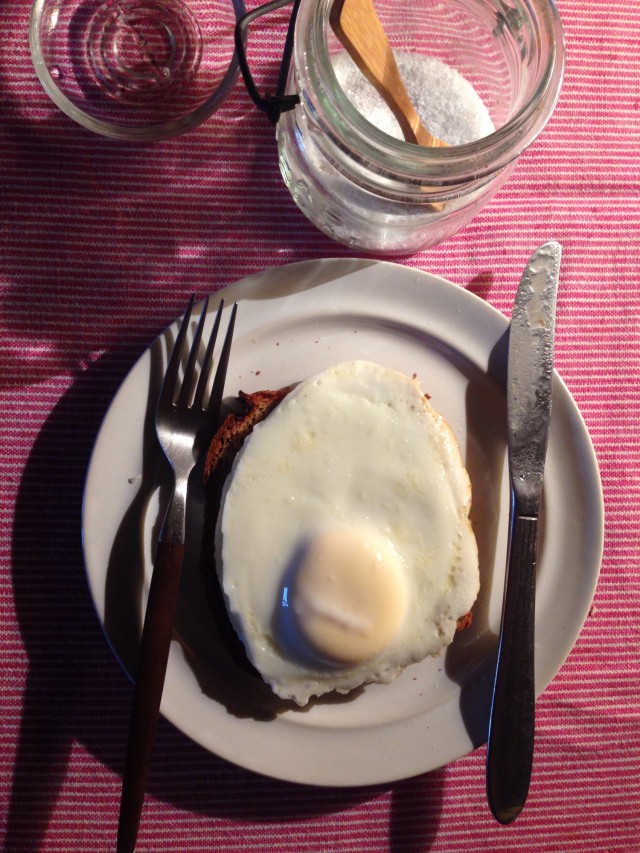 Hello from my ever-present default setting, the egg*.

It’s been a little while. Or, a long while, depending on your perspective. Hello.

A couple of developments in the interim since I’ve been here:

I’ve signed a book deal to co-write a cookbook – with cultural memoir – about German-Jewish cuisine with my mother, Gabrielle Rossmer Gropman!! Our publisher is Brandeis University Press, part of University Press of New England, and our book will be part of the HBI Series on Jewish Women. Publication date: Fall 2017. Naturally, we are excited and  grateful for this opportunity. And rather busy. Perhaps (at least partially) one of the reasons for my absence here.

Also, tra.la.la, I’ve joined Instagram since last I was around here! @sonyagrop

See you sooner rather than later.

* and SALT, which is a must when eating an egg.

Food on the Floor: Chinese Noodles

To be filed under ‘bizarre afflictions’, I awoke recently to a cup of coffee that left me with a bitter taste in my mouth. Not thinking much of it, it wasn’t until that evening that I realized that everything I’d eaten that day had left me with much the same sensation. Why the bitterness? I feared I was being overtaken with a nasty case of cynicism. When it continued for a second day I became a bit concerned. In the amount of time it took me to enter a question about the symptoms in a search engine and click the return button, I had an immediate answer: Pine Mouth, a mysterious reaction to eating pine nuts! Mysterious because there is no known reason for this reaction, though the experts swear it is not an allergic reaction. Huh?

There are various theories about the cause of this syndrome: the origin of the nuts (Chinese vs. Italian vs. other countries), fresh vs. rancid nuts, etc., though none of them seem to be based on concrete data. Mine came in a bag that stated the origin as three possible places: Korea, Russia, and/or Vietnam. The bag also had a tiny box with a disclaimer stating that some people might have a bad reaction to this product which could result in a metallic taste in one’s mouth. Hmpff. Whole lot of good that did me. Fortunately, my Pine Mouth didn’t last terribly long (some people claim to have it for as long as several weeks), as it tapered off within a week, fading each day. I had the strongest reaction when eating acidic foods. The last few days I forgot about the episode entirely until biting into a slice of a Florida orange,  its wonderful citrus aroma morphing into an explosion of bitterness once it reached my mouth. I’ll certainly continue making this kale salad — which is where I’d added the pine nuts, slightly toasted, thinking their earthy crunch would be a nice addition (and they were! until they weren’t) — though I’ll use alternate additions/substitutions. In the meantime, I’m so appreciative to be able to once again enjoy my Page oranges for all their sweetness and fragrant orangeness.

Note: these photos are not Page oranges.

[whissk, whissk]. Hello! That’s just the sound of me taking a broom and dusting things off around here — sweeping the corners clean and airing out the joint. Once again, it’s been an eon (or two) since I’ve set foot on the premises…

I took these fotos on halloween — they seemed quite mask-like, almost like an ancient object made from hammered metal — gold, or bronze — decayed through many centuries worth of aging and built up with layers of decrepitude and patinas. The sort of mask a fierce warrior setting off across the ocean to battle enemies might wear. They are, instead, the frizzled edges of a fried egg that turned amber and golden and crispy beyond all recognition after sizzling in a pan of very hot oil.

Oh, hi. I just tripped into this space and found lots of cobwebs, as well as an unused post — one filled with juicy purples and greens from July — that has been dangling here, waiting. Being something of a pack rat, I hate to let anything go to waste.

I don’t remember what type of tomato this was, but it was stripey and heirloom something-or-other and despite it’s cloak, it didn’t taste especially green. It was firm and had crisp skin that snapped when bitten into and it was both astringent and sweet and made for a fine tomato sandwich. I just read somewhere that the classic children’s book Harriet the Spy — which was an especially favorite book of mine when I was a kid — was once banned, which left me flabbergasted. It was Harriet who taught me the joys of eating a tomato sandwich. And though I do not eat one every day, I think I very nearly could.

I’ve got loads of images from the summer that I am (finally) ready to dig out and write up. So, on that note I’ll find me some traction and get going. I hope you had a splendid summer — or winter, if you’re in that other hemisphere — and here’s to a happy equinox.

How to eat a carrot? The question was: what to do with this beauteous bunch of small, sweet, just-picked carrots procured at the small farmers’ market in northern Vermont. I opted to shred a couple of them, and in combination with a few of these leaves plucked from the garden,

turned it into a bowl of kale salad which included the brilliant – if I do say so – addition of thinly sliced crescents of celery. It was a winning combination of flavors, the aromatic  celery a lovely counter to the earthy, slightly bitter kale, and the sweetness of the carrots. A recipe for kale salad from a post I wrote a couple of years ago can be found HERE – (simply omit the ricotta salata and add celery and carrot for this version). 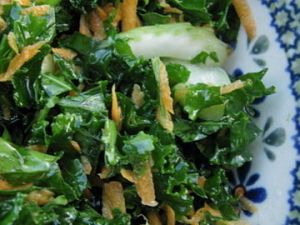 However, when presented with one of these carrots, another member of the household – a four-legged, furry one – opted to consume her carrot in a different way. One she seemed to enjoy quite thoroughly. 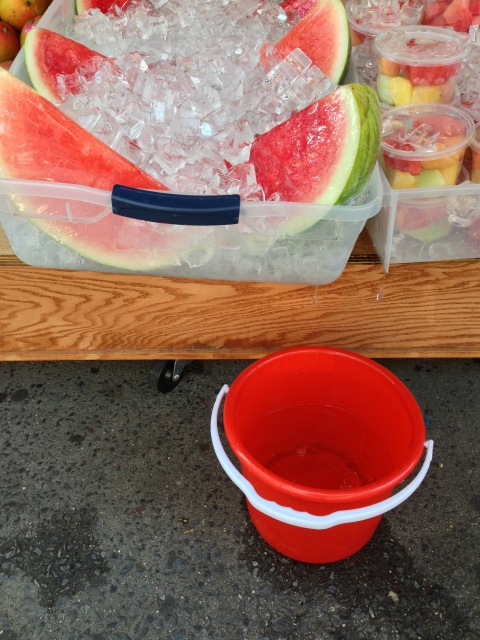 Walking past this sidewalk fruit display – with its catchy watermelon-red plastic bucket set up to catch the drips from the melting ice – served as a vivid reminder. 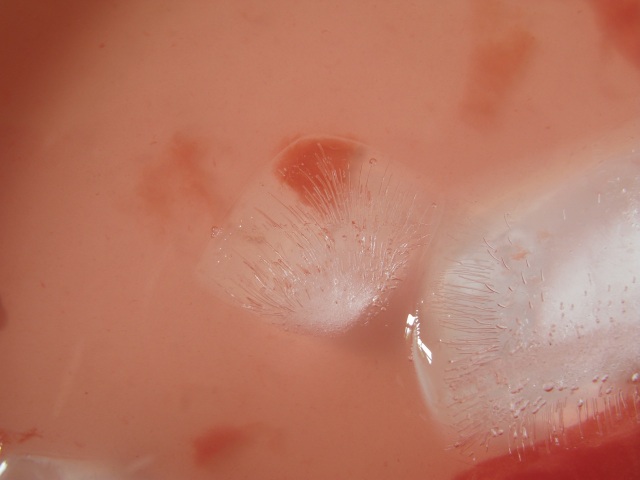 I attended a Mayoral Candidate Forum on the Future of Food in NYC tonight at The New School. It was a packed auditorium, with an overflow crowd watching a live feed in other rooms. Marion Nestle did a stellar job as moderator – asking each of the six candidates who participated several questions, with a fourth question coming from a member of the community sitting in the audience. Much was discussed about the 1.5 million NYC residents (1 in 4 children) who do not have enough food to eat, school food programs, the magnitude of NYC’s buying power, etc. and ways to address these issues. Each candidate only had a mere minutes on stage, but there were some compelling statements.

Most telling, I think, was the fact that this forum took place at all. Apparently this event was historical in that it was the first of its kind. Clearly issues of food access, health, living wages, sustainability, local agriculture and more are being taken seriously – a good thing. 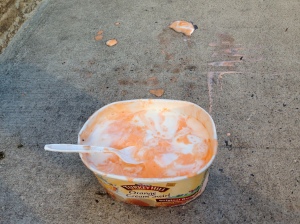 I am regularly intrigued by the sight of food on the sidewalk – whether dropped, fallen, thrown, broken, or blown, the general assumption is that the thing in question has accidentally wound up down there (unless it’s been intentionally left as an offering to someone or something, which is another story altogether). But this was an entire tub of Orange Cream Swirl ice cream – a large tub, at that! – purposefully set down in the middle of a sidewalk in broad daylight. One that had melted into an opalescent puddle of sticky liquid, looking not unlike the swirled waters of the Gowanus Canal – with a single spoon at the ready, as if the person was in the middle of eating it and suddenly had to skedaddle but might be back at any moment to continue this herculean task of eating an entire tub of ice cream…